About Help Wanted at Mount Vernon 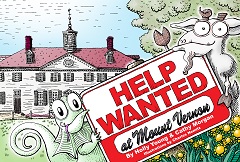 About the book:  Math and History collide to create a story about problem-solving and General Washington's amazing home - Mount Vernon.  This book is written by math teacher and educational consultant Holly Young and history teacher Cathy Morgan:  Hyram, a smooth-talking spitting lizard, and Lloyd, a high-stepping fainting goat, are looking for new jobs, and Mount Vernon is hiring.  Can these two friends work in the fascinating and complicated home of the first president of the United States of America?  Hyram and Lloyd have quite an education ahead of them while they figure out the details of their new jobs.

See accompanying lessons on History and Mathematics at Books.

To teachers or parents,

It is our hope that questions will emerge after or even while reading our book, Help Wanted at Mount Vernon.  It was our intent that this book would provide a multitude of teachable moments or springboards for further activities.  From the standpoint of both jobs as a parent or teacher, there is nothing worse than being unprepared.  So, here is a list of thoughtful questions that you may be asked and also, the secret answers by the authors who are teachers and mothers.

Q:  Are the names of the characters significant or did the authors just choose something they liked?

A:  So glad you asked that question!  Yes, the names do have a purpose and here are the reasons they were chosen:  Peace and Liberty – While on a teachers institute at Mount Vernon, Cathy Morgan received a behind-the-scene tour of Mt. Vernon.  She discovered that turkeys who are pardoned by the president before Thanksgiving are given to Mt. Vernon!  Guess the names of the turkeys she saw?   Peace and Liberty!  Nellie was the nickname of Washington’s granddaughter.  Nelson was the name of one of Washington’s favorite horses that he used during the Revolutionary War.  Lawrence was the name of Washington’s half-brother who was the original owner of Mt. Vernon.  Venus was the name of one of Washington’s dogs, a Virginia hound.  Oliver was chosen for a man named Oliver Evans.  He was the inventor the “Evans system” which was a mill that moved grain and flour throughout all steps of the process without need for manual labor. Washington used this system at his grist mill.  Lloyd was chosen because Cathy Morgan thinks the name is amusing.  Hyram was chosen by Holly Young because she is weird.

Q:  Is there a reason that certain animals were chosen as characters?

A:  What an insightful question!  (Teachers love that.)  The dog was chosen because General Washington bred dogs.  He actually created the American foxhound.  The other significant animal we included was the mule.  Why?  George Washington was instrumental in breeding mules in the United States because of their value in farming.  The other two characters that need to be mentioned are, of course, Hyram and Lloyd.  Both these animals are amusing and quirky.  We needed to find animals with characteristics that would add an interesting twist and addition to any story.  So, we chose a spitting lizard and a fainting goat – a couple of odd but sweet friends.

Q:  Did animals do all the work at Mt. Vernon when Washington was alive?

A:  Another excellent question!  Your teacher would be proud.  George Washington, like many wealthy Southern planters, used black slaves as his main labor force.  They worked on the farms and in the house.  This was a sad reality. Washington had a personal slave named Billie Lee who accompanied him throughout the American Revolution. At the time of Washington’s death, there were over 300 slaves at the General’s plantation. Washington owned his first slaves at the age of 11 when his father died.  In his will, Washington stated that the slaves would be freed when his wife, Martha, died.   http://www.mountvernon.org/george-washington/slavery/

Q:  Why did you choose Mt. Vernon as the home where Lloyd and Hyram visit?

A:  First and foremost, one of the authors (Cathy Morgan) has a “history crush” on General Washington.  She was given a wonderful opportunity to join a select group of teachers to spend a week at the mansion through a teacher’s summer institute.  The attraction started then.  “I have always been a big fan of President Washington but the time spent at Mount Vernon learning about the home and the General was what motivated me to love him even more!”  As readers will discover in the book, there are many reasons to admire this amazing man.  Let the story serve as a jumping off place to learn more!!

Q:  Does the Washington family still own Mount Vernon?

A:  This is such a great story because it involves a group of women who ultimately purchased the mansion from John Augustine Washington III in 1860.  These women called themselves the Mount Vernon Ladies Association and this amazing organization has been responsible for taking care of the mansion ever since. (They were even able to convince generals during the Civil War not to fight on the grounds of Mt. Vernon!)  The vision of this group has been to preserve the home of President George Washington and allow millions of people to visit each year!  Thank you, ladies!!!  Resources: http://www.mountvernon.org/about/mount-vernon-ladies-association/

Q:  The circular barn on General Washington’s estate was so cool.  Why did he pick 16 as the number of sides to his barn? 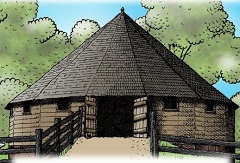 A:  The barn was created so that horses could trot in a circle and smash the stalks of grain with their hooves.  A round shape would keep the horses from running too fast because if a horse only trots, he can’t poop or pee on the stalks.  (That would wreck the whole process, don’t you think?)  The best shape would be a circle, but constructing a circular barn in General Washington’s time would be very difficult to make, especially out of wood.  Circular barns made around 1800 were constructed out of an adobe mix which would not be a strong enough material in Virginia’s rainy, humid weather.  If you want to know why 16 sides, check out the lesson located at Math: The 16-sided Barn.

Q:  The giant rake cooling the flour at the gristmill is really fascinating.  How did it move without electricity?

A:  The rake is only part of the elaborate system to process wheat and flour and it is all powered by a giant water wheel.  The mill itself was designed by Oliver Evans.  He wanted to protect his invention by applying for a government patent.  (A patent is a way that an inventor can receive a profit for something cool he invented and no one can steal his ideas!)   As President, Washington learned of this new mill design.  It was actually the third patent granted in the history of the United States. What impressed President Washington was that the whole system had the ability to move the wheat and flour without manual labor.  It was an entirely automated process!  How cool is that? The system also contains something called an Archimedes spiral. This is another really mind blowing thing that you should definitely research!   For an intriguing activity about the giant rake visit Math: The Grist Mill.