*This lesson coincides with Chapter 9, To Err is Wrong, from A Whack on the Side of the Head by Roger von Oech.

Objective:  Students will experience that failures can be successes through experimentation and discussion.

Step by step instructions for the lesson: 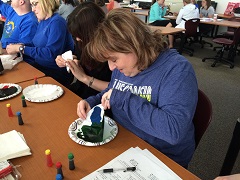 1.     Students use food coloring and coffee filters to create something they would see in nature without any black or white showing on the coffee filter.

2.     Students must use all four colors from the bottles.

3.     Students will be given only 4 minutes to create a project and then discuss success and failures

4.     An additional 1minute will be given for students to make any changes using scissors, string, paper clip or rubber band to reach the goal.

Questions to pose to students:

Can you think of another way to be successful in this activity?
What is the value of the change you made?
What would happen if you never failed?

Should a teacher create situations where students will fail? Why or Why not?

Share Notable Facts from Von Oech, Roger, A Whack on the Side of the Head, 2008

Boston Red Sox first baseman Carl Yastrzemski became the fifteenth player in baseball history to reach the three thousand hit plateau. This event drew a lot of media attention, and for about a week prior to the attainment of this goal, hundreds of reporters covered Yaz’s every move. One reporter asked, “ Hey Yaz, aren’t you afraid all this attention will go to your head?” Yastrzemski replied, “I look at it this way: in my career I’ve been up to bat over ten thousand times. That means I’ve been up to bat over ten thousand times. That means I’ve been unsuccessful at the plate over seven thousand times. That fact alone keeps me from getting a swollen head.” (pg. 208)
Columbus thought he was finding a shorter route to India. (pg. 209)
Thomas Edison knew 1,800 ways not to build a light bulb. (pg. 209)
Charles Kettering, one of the twentieth century’s great creative minds, had this to say about the value of learning to fail:
An inventor is simply a person who doesn’t take his education too seriously. You see, from the time a person is six years old until he graduates from college he has to take three or four examinations a year. If he flunks once, he is out.But an inventor is almost always failing. He tries and fails maybe a thousand times.  If he succeeds once then he’s in. these two things are diametrically opposite. We often say that the biggest job we have is to teach a newly hired employee how to fail intelligently. We have to train him to experiment over and over and to keep on trying and failing until he learns what will work. (pg209)